Award Veterans for their Service with Military Statues 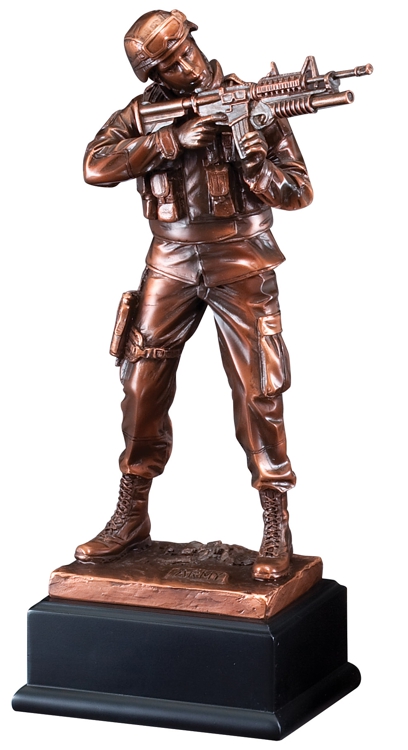 We would like to remind everyone to honor our brave service personnel, present and past, this Veterans Day. Our service men and women deserve our thanks and respect, and we at Hit Trophy wish to do our part.

At 11 am, on November 11, 1918, the fighting of World War I ceased, and a year later President Woodrow Wilson proclaimed November 11 to be Armistice Day, and in 1938, the U.S. Congress made it a legal holiday.
For many years, the eleventh hour of the eleventh day of the eleventh month was celebrated with parades and public meetings. After World War II and the police action in Korea, the name of the holiday was changed to Veterans Day to honor not just WWI service personnel, but all members of the armed forces.

According to www.goarmy.com, we have almost 500,000 active duty members of the army. With nearly a half a million soldiers in service, surely you know someone that serves. Why not show your appreciation by presenting the army member one of our military and patriotic awards and gifts? Item RFB134 Army Statue may be just the gift! This nearly 12” statue has a base plate with enough room for three lines of type. Express your gratitude, appreciation, or love for that soldier in your life. We offer five other statues as well you may wish to review. Like the Army Song says, when your favorite soldier comes “rolling along,” thank the member with a gift.

Unlike the Army’s Song, sailors sing out “Anchor’s Aweigh” as its fight song. With a proud history of 237 years, the U.S. Navy has become a global force to keep the peace. Its website, www.navy.com, points out that 70% of the earth is covered in water, and 80% of the planet’s population lives close to a coast; therefore, the mission of our Navy is huge, and members of the Navy bear an enormous responsibility. Admiral Jonathan Greenert says, “Our Navy will be made up of the most sophisticated, professional, and disciplined sailors in the history of our great nation.” Want to show your admiration for a certain dedicated sailor? Item RFB132 Navy Statue is a foot tall statue of a sailor in the traditional uniform: cap, jumper with black kerchief and bell bottom pants. Below the statue, you will receive up to three lines of free engraving to personalize the statue.

Is your favorite service member in the Air Force? We can help you too! Although it is the newest of the four major services, we have not forgotten about our airmen. With its roots originally in the U.S. Army, the Air Force became an independent branch in 1947. It slowly grew away from the Army, very slowly. The U.S. Army Signal Corps first established an aeronautical division, but from the Civil War until 1907, the Signal Corps had only acquired eight balloons! But by World War I and World War II, an immense need arose for more aviation equipment, and planes established their importance during these two wars. From its meager beginnings, the number of airmen will be 332,200 by the end of 2012, according to www.airforcetimes.com. To say thank you to one of those airmen, check out RFB133, our Air Force Statue.

We saved the arguably toughest of the services, the U.S. Marines, for last, but the best is always saved for last right, right? Well, unless you’re a marine. The marines are often the first to arrive whether it’s from the halls of Montezuma to the shores of Tripoli. Although associated with the Navy, never call a Marine a sailor unless you wish to start a fight. Their website, www.marines.com, states the Marines act as an “expeditionary force which is deployed to respond swiftly and aggressively in times of crisis.” Show your marine how you feel with our statue RFB135. Don’t forget to personalize it with free engraving!

In conclusion, this year celebrate Veterans Day with our help. We have over 60 gifts to salute your service member. We have everything from plaques, statues, flag display cases, picture frames, and many other patriotic tokens of appreciation. To view our complete collection of Military Awards simply click the following link.