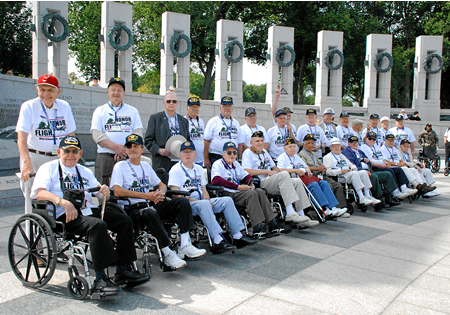 Armed Forces Day on May 18 and Memorial Day on May 27 are observed this month, so it makes sense that May has been declared Military Appreciation month.  To show our appreciation for the military, we at Hit Trophy wish to give some recognition to a local organization:  Honor Flight Northwest Ohio.

According to Lee Armstrong, President of Honor Flight NWO, “Approximately 1200 veterans from World War II are passing every single day.”  Because these veterans are passing, the nonprofit organization Honor Flight Northwest Ohio has the mission of flying veterans to Washington, D.C. to view the memorials erected in their honor.  Many of these men and women have never seen the monuments built to pay tribute to them.

The Honor Flight Network was founded by Earl Morse in 2005. To date, this network, which is comprised of 101 regional hubs in 39 states, has flown approximately 81,000 veterans to the memorials in Washington, D.C.   Seven local hubs are located in Ohio, and the NWO hub flies out of the Grande Aire hangar at Toledo Express Airport.

The Northwest Ohio hub of this national organization recently marked a number of milestones.  The local group sent its first flight of veterans to Washington, D.C. back on April 30, 2008.  Ironically, on April 30, 2013, the group sent its twenty-ninth flight on its fifth anniversary.  Also, this particular flight was the first time the local hub has accepted veterans of the Korean War.  Finally, the flight became a memorial to an important member of the local organization.  Ron Miller, who passed away on December 7, 2012, will be missed by all he worked with at the Honor Flight NWO hub, so in his honor, the flight was dubbed the Ron Miller Memorial Flight.

Although the flight marked a number of milestones, the schedule of events consisted of a typical flight.  The day started at the Grand Aire Hangar around 6:30 where a breakfast was served.  After boarding the chartered 737, the veterans took the short flight to Washington.  They were greeted as heroes at Dulles Airport with people waving flags and a band playing patriotic music.  A lunch was then served.  Besides visiting the World War II memorial, the Korean War memorial, and many other sites on the mall, the thirtieth flight of 147 people stopped at Arlington National cemetery.  They watched the changing of the guard at the Tomb of the Unknown Soldier.  A police escort whisked them back to the airport, and the flight was home by 8:00 p.m.  Again, the veterans were welcomed with balloons, cheering loved ones who waved flags, and music courtesy the Genoa American Legion Band.  A mail call was announced, and each vet received a gift bag of mementos from Washington.

All of this was provided free of charge.  Each veteran had a guardian on the flight, and the guardians paid a fee, but the food, flight, and gifts were all free to the veterans.  To provide this service, Honor Flight Northwest Ohio is always looking for sponsors and donors.  If you are interested in helping this worthy cause, check out the website, Honor Flight of Northwest Ohio.  The website also provides information on how to sign up a veteran for this once in a lifetime experience.  It is a great way to tell your veteran “Thank you for your service!”

If you have a veteran in your life, we also provide a number of ways to say “thanks” to you veteran or soldier during Military Apprecaiton Month.  Our Military Awards & Gifts category offers over fifty ways to show your appreciation.  Check out our military statues, plaques, and picture frames by clicking this link.  We also provide patriotic gifts such as eagle statues, acrylic awards & desk name plates, some of which feature the American flag.  So take a moment to swing by that page and definitely consider checking out the Honor Flight Northwest Ohio website too.  They’re a great cause that is doing great things for our heroes.